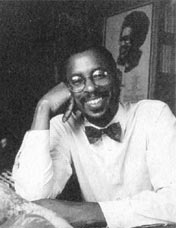 Egberto Miller walks to the subway carrying his lunch. My mother has taken the time to fix him a good meal. I will remember the exchange of small brown paper bags more than hugs and kisses between my parents. When we moved into the St. Mary’s Housing Projects, we lived on the seventeenth floor; my mother would watch my father walk to work from the bedroom window. Behind her would be an unmade bed. The outline of my father’s body was still trapped against the sheets and blankets. My father never overslept when it was time to go to work. He never dragged himself out of bed. He was up and in the bathroom washing his body before you could even talk to him. This is why I believe he never dreamed. His eyes never had that soft, hazy, distant look. His eyes never looked tired. When you work hard everyday you don’t look tired; you are tired but you never mention it. There are no excuses.

I wonder what my mother thought about my father always sleeping? No time to really go anywhere. What was she thinking while bending over the stove? My father is sitting at the kitchen table. He props his head up with his hands. He is waiting for his meal. Years from now I will recognize this pose. It’s the picture we get from the loser’ locker room after the World Series, the Super Bowl or the N.B.A. finals. It’s defeat after making an error, the ball going in and out of the rim. A foot touching the line in the end zone. Or worst, the referee or umpire missing the call. Yet there is something heroic about my father. It took many years for me to realize the simple beauty behind how he ate his food. The care that he gave to even the most mundane task.

Just before I went off to college, he printed my name in the inside of a new typewriter case, his block letters so beautifully even. I looked at my name each time I took the typewriter out.

Excerpted from chapter two of Fathering Words: The Making of an African American Writer by E. Ethelbert Miller.
*Posted with permission of the author.

I'm a fellow at American University studying creative nonfiction and poetry. I write across a few genres but it's all brought together by larger questions about culture.
View all posts by Abdul Ali »
« Fatherhood
Installation #2 (Fatherhood Series) »