By the Way, Sanaa Lathan is Back on Stage 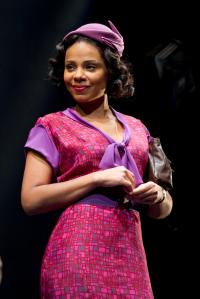 Sanaa Lathan has fashioned an enviable acting career going back to the 1990s. All hands down, her most beloved movie is Love & Basketball. Since then she’s amassed an impressive resume with a diversity of characters in film, television, and theater. Theater has been the recent focus of her career, a throwback to her training at the prestigious Yale School of Drama, which earned her a Tony award nomination for her portrayal of the sassy Beneatha in A Raisin in the Sun.

theGrio spoke with Sanaa Lathan about her recent hiatus from films to focus on once-in-a-lifetime roles in theater, what its like being a black actress in Hollywood today (setting the record straight about a couple of things), and what she’s working on next.

By the Way, Meet Vera Starks is playing at Second Stage Theater in New York City. The play which opens on May 9th, pokes fun at Hollywood while paying homage to black actresses like Theresa Harris who had so much more to give Hollywood but spent her career playing maids in mediocre films rather than playing leading ladies that their talent deserved. By the Way, Meet Vera Starks was written by Lynn Nottage, who won the Pulitzer Prize for her play Ruined in 2009.

TheGrio: How did you come across the role of Vera Starks? It seems almost handwritten just for you?

Last year I was in London doing Cat on a Hot Tin Roof, Lynn was there doing a play. We talked and she offered me the workshop for the play. I was excited to play the character from the moment I read it. What a great character to play that deals with real issues that we deal with even today and in the industry.

How did you prepared for this role — emotionally, physically, spiritually? I know this is a historical piece, any research you had to do?

We watched a lot of 1930s Foucault movies. There’s a great one called The Flame of New Orleans. There’s an actress named Theresa Harris who plays in this movie. Like Vera Stark, she made a career of playing maids. We watched a lot of 1930s screwball comedies. Thank God for YouTube! A lot of Ed Sullivan type shows with divas like Lucille Ball, Pearl Bailey, Judy Garland, and Betty Davis.

So what’s it like working in Hollywood? For the most part Hollywood seems pretty segregated. I saw many parallels with the play and the situation of black actors in Hollywood today.

All you have to do is look at what’s being put out there to see that Hollywood is like the last frontier. There’s definitely is a lot of inequality in Television and Hollywood. The one thing I’d love to see when I go to the movies is to see movies that reflect the world that I live in. Now when I go to the movies, I don’t see that. All I ask is that movies start telling the stories of the entire experience of America.

Read the full interview on theGrio.

I'm a fellow at American University studying creative nonfiction and poetry. I write across a few genres but it's all brought together by larger questions about culture.
View all posts by Abdul Ali »
« Tyler Perry Vs. Spike Lee
Summer is Here »