“Maid” in Hollywood: America’s Love Affair with “The Help” 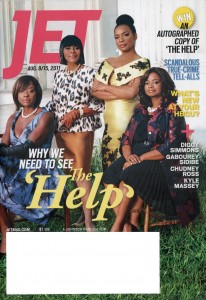 Two weeks ago, my daughter and I snuck into a screening of “The Help.” It was a Bonnie-and-Clyde operation. (We weren’t officially on the press list.)  What made risking embarrassment worth it is that my daughter wants to be an actress. And like any doting father, I’ve taken to nurturing her nascent interest in acting. Her summer has been spent at theater camp. While she learns about stagecraft, her dad writes about film and theater—interviewing actors, playwrights, and directors at traveling productions that trickle to Washington from New York.

Though only twenty years separate us—in Hollywood years—one would think we’d be further along as a national cinema. Just as my parents and grandparents did, I grew up watching films in which black actresses portrayed maids and it seems my daughter has inherited a cultural legacy that should have phased out with paper bag tests, hot combs, Jheri curls (and a miscellany of other unflattering aspects of African American lore.)

We’ve spent hours watching films and discussing their political implications over the past couple of months. We watched “Sarafina,” and bobbed our heads to Miriam Makeba’s freedom song on Netflix. Much to my delight, my daughter independently made the connection between the South African apartheid of the 1990s and the American apartheid experienced here in the United States by millions of African Americans in her grandparent’s lifetime (or more accurately, great-grandparents.)

For two hours and seventeen minutes, my daughter and I watched a Julliard-trained thespian shrink on the screen as a slow-talking maid from Mississippi.

“The Help” presented a heavy burden as an African American father. This proved to be much more than a daddy-and-daughter’s night out. In effect, I had to sift through a century-old racial narrative in American film with my seven-year-old. Viola Davis’s character, Abilene, triggered numerous questions for my daughter.

Every five minutes or so, she’d lean in whispering Why don’t those ladies take care of their own baby? Why can’t the black women use the same bathroom as everyone else? Was this during slavery days, you know, back in the day?

Having to shh my daughter after each question brought home the fact that this film presented a larger quandary than I had bargained for: how does a seven year-old reconcile the image of a black woman playing a maid from the 1960s with the image of her mother, a professional woman, or say, Michelle Obama, our first lady or even her first grade teacher? Will the roles of black actresses ever catch up with the times?

It’s stunning how Hollywood has progressed in inches in the past two decades. When I was my daughter’s age, I remember seeing films like “Claudine” (1974) starring Diahann Carroll, who plays a maid.

And while actress isn’t uppermost in many people’s minds when we think of Oprah Winfrey, I still believe that she gave one of the finest performances I’ve witnessed in American film in the past almost three decades as the strong-willed Sophia in “The Color Purple” (1985). Though she initially tells the mayor’s wife “hell no” when solicited “How would you like to come work for me, be my maid.” In a heartwrenching twist,  Sophia (Oprah Winfrey)  ends up being a maid to the mayor’s wife until old age–a sobering reality of how the agency of black women have been severed thanks to white racism.

There was Whoopi Goldberg who starred in “Corrina Corrina” (1994) where she plays a maid for the Singer family but quickly becomes the love interest, a huge shift from the typical narrative of black maids, suggesting a progressive strand after all in Hollywood studios, albeit belated.

This isn’t to say that my daughter (and kids her age) should be protected from a very real aspect of American history. But as a father who happens to love film how do I temper my frustration with a Hollywood that probably will never create the kinds of roles that serious African Americans train for years in hopes of one day getting a big break—as a maid.

“Sometimes we’re so concerned with image and message, and not excellence. No one ever ask white actresses like Meryl Streep or Jodie Foster what messages they’re going to take away from their films” Viola Davis told Essence magazine recently.

It’s hard to disagree with Davis. I get that African Americans can be overly concerned about image (but for legitimate reasons.)

As the theater lights turned on, I noticed my daughter’s eyes were glossy. I didn’t need to say a word. As we walked out of the theater I said, “Aren’t you glad you were born in 2004, instead of 1904?” She nodded, shot me a pensive looks then said, “When I grow up I’m going to be educated.”

I nearly bit my tongue as Viola Davis went to the Julliard School, one of the finest training grounds for serious talent. If only a good education could save a black actress from pushing a broom across the silver screen. I’m her father but does that give me the right to burst my daughter’s dream? What are the chances of her becoming the first black actress who didn’t have to play a maid? Possible. But, this is one conversation I don’t look forward to having when she gets old enough to know that to make it as a black actress is to be “maid” in Hollywood.

Abdul Ali is a freelance culture writer who resides in Washington, D.C.

I'm a fellow at American University studying creative nonfiction and poetry. I write across a few genres but it's all brought together by larger questions about culture.
View all posts by Abdul Ali »
« Check, Please: Black Folks and Tipping
There Goes the Neighborhood: Why Clybourne Park Doesn’t Do Right by Its Inspiration »

7 thoughts on ““Maid” in Hollywood: America’s Love Affair with “The Help””