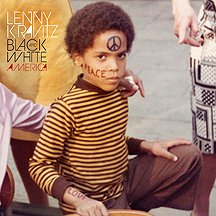 Black and White America, Lenny Kravitz’s ninth studio album, is technically a very fine album. But if you’re not willing to overlook the fact that Lenny Kravitz sidesteps talking about race in America — which the title of his album suggests he will — then you might understandably dismiss the album as artistically dishonest and pandering to the pop culture machine.

“People used to yell obscenities and spit at them,” revealed the 47-year-old Grammy-award-winner about his parent’s interracial marriage during the tumultuous 1960s. He continues, “and this was in New York City, not in the South.”

Lenny Kravitz was born in New York City in 1964, to Sy Kravitz, a Jewish television producer with NBC, and the pioneering black actress, Roxie Roker, best known for her role on 70s the television sitcom, The Jeffersons.

In a recent article in USA Today Kravitz discusses his new album saying, “I was channel-surfing in the Bahamas one night and came across this documentary. I don’t remember what it was called, but it had all these people talking about President Obama. I know that there’s racism, but to hear people voice it in such a hateful way — I had to write a rebuttal.”

It’s risky business when artists tack provocative titles onto their work and fail to follow-up on said title as if being provocative itself justifies the work. (Not to mention it insults the audience,eh hem). The initial shock value quickly turns to chagrin.

I'm a fellow at American University studying creative nonfiction and poetry. I write across a few genres but it's all brought together by larger questions about culture.
View all posts by Abdul Ali »
« There Goes the Neighborhood: Why Clybourne Park Doesn’t Do Right by Its Inspiration
Next Post »