The Mic Was Still Open 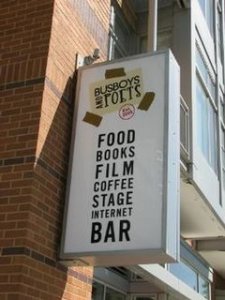 With my college days almost two years behind me, my daughter being grown and now school-aged, I must admit that hitting up the open mic has taken the back seat, maybe even the trunk. I do, however, make time for readings which are quite different in a lot of ways.

But what Derrick Weston Brown does at Bus Boys and Poets is somewhat unique. He mixes the open mic with features, who are almost always solid poets from near and far who change the air irrevocably. There’s a democratic-ness to the assemblage: neither the open mic or the feature seem bigger than the other. It begins and ends with poems, some rough around the edges, some rants, but moving all the same (even it it moves you to laughter or chargrin or disquiet).

One of my favorite pastimes is to just sit back in the cut. And before you know it, I’ll see some familiar faces–Alan King, Fred Joiner, Katey Richey, Holly Bass, Kyle Dargan, Melanie Henderson, Truth Thomas, to name a few. It’s really a thing of beauty going through the motions of sticking you head out and seeing your people, poets you remember you when you were just cutting your teeth in Tony Medina’s class at Howard University.

Ruth Forman was an electric presence. I saw her maybe two or three times before I even knew it was her yesterday evening. There was a belatedness to our stares as if we had met each other before and recognized the other but couldn’t pull the name out of our fading memory. I am also grateful for meeting her beau. He was so kind to promote her reading on my radio program on WPFW.

After almost two years of not being a regular fixture at Bus Boys and Poets, it’s nice to know that the Mic is indeed forever open. Much appreciation to the good people at Bus Boys and Poets–our gathering place for poets with politics and purpose. And to the beautiful Washingtonians who swell the Langston room each week thirsty for the truth.

I'm a fellow at American University studying creative nonfiction and poetry. I write across a few genres but it's all brought together by larger questions about culture.
View all posts by Abdul Ali »
« Some Things I Did When I Wasn’t Blogging
Flashback Friday »

4 thoughts on “The Mic Was Still Open”